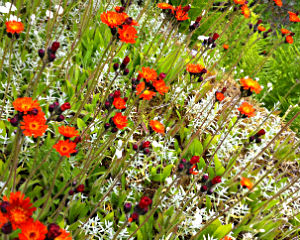 Somehow I missed June. It slipped right by. The first topic I had intended to focus on in June was going to be the weather, which seemed to be pretty unusual almost everywhere. Certainly here in Juneau it was more beautiful than we have come to expect. Then, an invasive species distracted me … in my own yard! I thought I’d write about invasive species, and I promise that I will write more on invasive plants later this month. I actually spent a couple of Saturdays trying to gain some ground against the orange hawkweed (Hieracium aurantiacum) that has moved into my yard and many other locations around Juneau. I think the persistent little plants are still winning … more on invasive plants and the weather in another blog.

July is National Park and Recreation Month. I hope each of you out there will help me celebrate by getting out, getting active and getting healthier! Take your friends and families along too. National Park and Recreation Month has been officially celebrated in July since 1985. Not only does this make July special this particular July is VERY special.

In case you haven’t checked out a calendar there are 5 Fridays, 5 Saturdays, and 5 Sundays in July! This hasn’t happened before in any of our lifetimes. In fact, it only happens once every 823 years . . . so don’t expect to see it happen again! Another interesting fact about this year (2011) is that if you take the last two digits of the year you were born and add the age you will be this year (before the end of 2011) the result will be 111 for everyone in the world. How does that work? 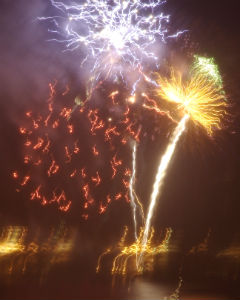 We will be celebrating the fourth with fireworks (weather permitting) at 11:59 on July 3, becoming the first event on July 4th. The days are so long and it is light so late into the evening that it has to be that late to be dark enough to really see them. Unfortunately sometimes clouds do get in the way and if that happens the event is delayed for a day or two. Later, during daylight hours of July 4th there are not one but two parades in recognition of the earlier days when Douglas and Juneau were two separate cities. Juneau’s parade starts first at 11:00 AM followed by the Douglas parade at 2:00 PM. That leaves enough time for parade entrants and spectators to get from one parade venue to the other. Many of the floats and vehicle entries participate in both parades, and even some of the marching groups make their way from Juneau across the bridge and into Douglas. The Douglas parade is known for its kids on decorated bicycles and other kinds of kid entries … and both parades are know for flying candy! I dare anyone to go home without candy in his or her pockets or without sampling some of it on the spot! (Trust me I’ve tried and I’ve failed year after year ….) 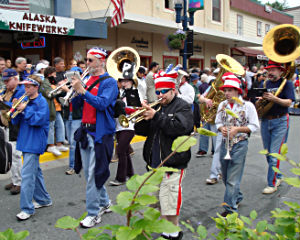 At 1:30 the 2-mile fun run starts at the base of the bridge on the Douglas Island side and runners run into downtown Douglas, with finishers leading the parade into town. There is a sandcastle building competition on the beach, and after the parade there are field events for people of all ages including 10 to 60-yard dashes, 3-legged races, sack races and other fun events. All participants receive $1. (No one gets rich but it is fun!) There is a deep-pit beef barbeque (and a variety of other food booths), soapbox race finals, pony rides, a dog frisbee contest, a watermelon eating contest and live music and dancing. In other words, there is fun for all. We often walk the two miles from our house to Douglas and leave our car at home. Unfortunately again this year the weatherman is calling for showers. Here in Southeast Alaska we are used to wet weather. Folks pull on their Xtratuf rubber boots and rain jackets and head out to enjoy the festivities in spite of the weather. You’ll see the mayor, legislators, even the governor out in Xtratufs. 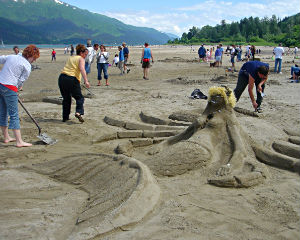 Circling back to our celebration of National Park and Recreation Month, following the parades, many of the days fun events, the sandcastle competition, field events, concert and food booths take place in Savikko Park, managed by the City and Borough of Juneau Parks and Recreation Department. In Juneau we are fortunate to have a variety of parks and trails managed by the City and Borough, Alaska State Parks, and the US Forest Service. Residents and visitors alike will be enjoying a variety of activities—some are organized like the 4th of July events at Savikko Park and others are informal family and friend events—at parks facilities around the borough. Some will walk, hike or bike, others will arrive by car, and some will travel by kayak or boat. 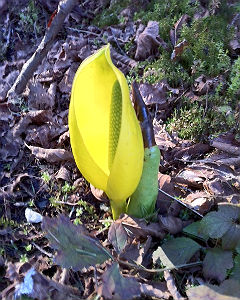 One sure sign of spring is the appearance of Western Skunk Cabbage, also known as simply Skunk Cabbage or Swamp Lantern (Lysichiton americanus in the west and Symplocarpus foetidus in the east), pushing its way up through the snow to claim the title of the earliest sentinel of spring. Skunk Cabbage, in addition to its beautiful bright yellow hood, or spathe, and large green leaves is fascinating because of its ability to melt the snow in order to make its way to the sun. For about 12-14 days in late winter it consumes oxygen as it breaks down starch stored in its roots. This process generates enough heat for the plant to maintain a temperature of 36 degrees as it melts its way through the snow.

Hummingbirds also signal the arrival of spring when they return from their winter homes in Panama and southern Mexico and fly around in search of hummingbird feeders and colorful hanging fuchsia baskets that keep them nourished until the wildflowers burst with blossoms. Arctic terns also have returned, flying in from Southern South America and Antarctica, making the longest migration of any bird or animal, traveling over 12,000 miles to nesting sites in Alaska. In Juneau, about 80 terns gather near Mendenhall Lake and will stay in the area until they fly south again in mid-August. They can be seen through binoculars from the shore and through spotting scopes from the Tongass National Forest Mendenhall Glacier Visitor Center. Looking through spotting scopes from the visitor center or from locations on Douglas Island or downtown Juneau we also watch bears that have come out of hibernation and mountain goats and their kids making their way into the lower elevations in search of tender spring vegetation. 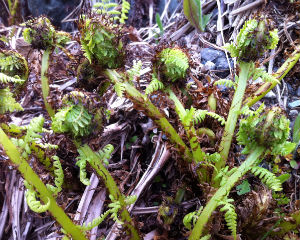 Local human residents also venture out in search of spring greens, especially the tender, succulent curled heads of the fiddlehead ferns that are so yummy sautéed in butter or added to a salad. We also see the lowest tides of the year, providing an opportunity to explore what the winter storms have deposited on local beaches and tide flats.

Spring, with summer hot on its heels, has arrived. The Carnival Spirit, the first cruise ship of the year, with many more to follow in its wake, arrived on Friday May 6 bringing 2,000 visitors into our community. Close to a million visitors will arrive by ship over the next four months. The 2011 cruise season will end when the Century, the final ship of the year, sets sail at 8:30 PM on September 24. Between now and then visitors rule downtown Juneau and frequent many of our trails and favorite places we go to enjoy good weather. On clear days they seem to own the skies as well, with helicopters and float planes a constant presence overhead. The helicopters flying visitors up and around the Juneau Icefield are known around town as the “mosquito fleet” for the buzzing sound they make overhead, often five or six in a row, as they fly from their pad near the airport up and over the Mendenhall Glacier. 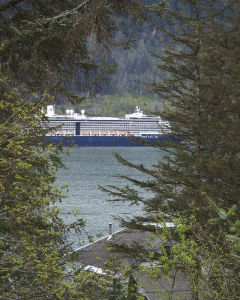 Three ships arrived on Wednesday May 11 and they made their presence known long before they docked. You didn’t have to see them to know they were arriving and you didn’t have to open your eyes and look out the window to know the fog was thick. In fact, when I did look out I couldn’t see the ships through the fog, and they couldn’t see each other. As a result, starting at the tender hour of 4:00 A.M. , they began sounding their fog horns every five minutes, blanketing the town with a loud noise that reverberated from the mountains behind the city across to the mountains on Douglas Island where I live and back again. It was like having an obnoxious alarm clock that went off every five minutes and no way to turn it off! Finally the ships docked safely, their horns silenced and the fog lifted to disclose a beautiful sunny day to be enjoyed by residents and visitors alike.

Spring events trip over each other as we transition from winter to summer. There is the Juneau Audubon Society bird watching cruise to Berners Bay, just north of Juneau, in April. We barely have time to catch our breath after the week-long Alaska Folk Festival in Juneau, also in April, when Juneau Jazz and Classics begins its three week run of jazz, blues, and classical music concerts. There are free concerts at lunch time in the State Office Building and free and reasonably priced evening concerts at a variety of venues around town, including local churches, the Juneau Arts and Culture Center and the Centennial Hall convention center. Guest artists (always an amazing line-up) also perform for students in area schools and teach workshops while they are in town. Juneau Jazz and Classics also sponsors a free Saturday of fun and music at the University of Alaska’s Auke Lake Campus. This year the event was on May 14, 2011. The Second Annual Maritime Festival was happening in downtown Juneau on the same day. (It was an amazingly beautiful day!) The Southeast Master Gardeners Association held their Annual Plant Sale May 7, the same morning that brave runners dashed across the mudflats between Douglas Island and the Juneau airport in the Spring Tide Scramble, sponsored by Southeast Road Runners.

Farther north the Nenana Ice Classic has come to an end for another year with the ice going out on the Tanana River on May 4, 2011 at 4:24 PM. As their reward for guessing the date and time of the breakup 22 winners will split the $338,062 purse and enjoy the celebrity of being this year’s winners.

Looking into the future, Saturday June 4 is National Trails Day. This day celebrates America’s 200,000 miles of trails, and the boundless energy of trail supporters and volunteers. The American Hiking Society and sponsors Backpacker Magazine, Columbia, Eastern Mountain Sports, Fetzer, Merrell, The North Face and partners REI and American Park Network are hosting over two thousand events around the country. The 2011 theme is Made With All Natural Ingredients. The American Hiking Society encourages everyone to get outdoors and to invite someone new to the outdoors to come along. For more information or to find an event near you go to www.AmericanHiking.org.

June 11 is National Get Outdoors (GO) Day celebrating America’s Great Outdoors and encouraging kids and their families to explore the outdoors together. Lead by the USDA Forest Service and the American Recreation Coalition this effort builds partnerships between public and private sector interests. The focus of GO day is to influence Americans, especially youth, to participate in outdoor activities and to make outdoor recreation a part of healthy lifestyles. For more information about GO Day events go to www.nationalgetoutdoorsday.org.

How will YOU celebrate National Trails Day and National Get Outdoors Day?